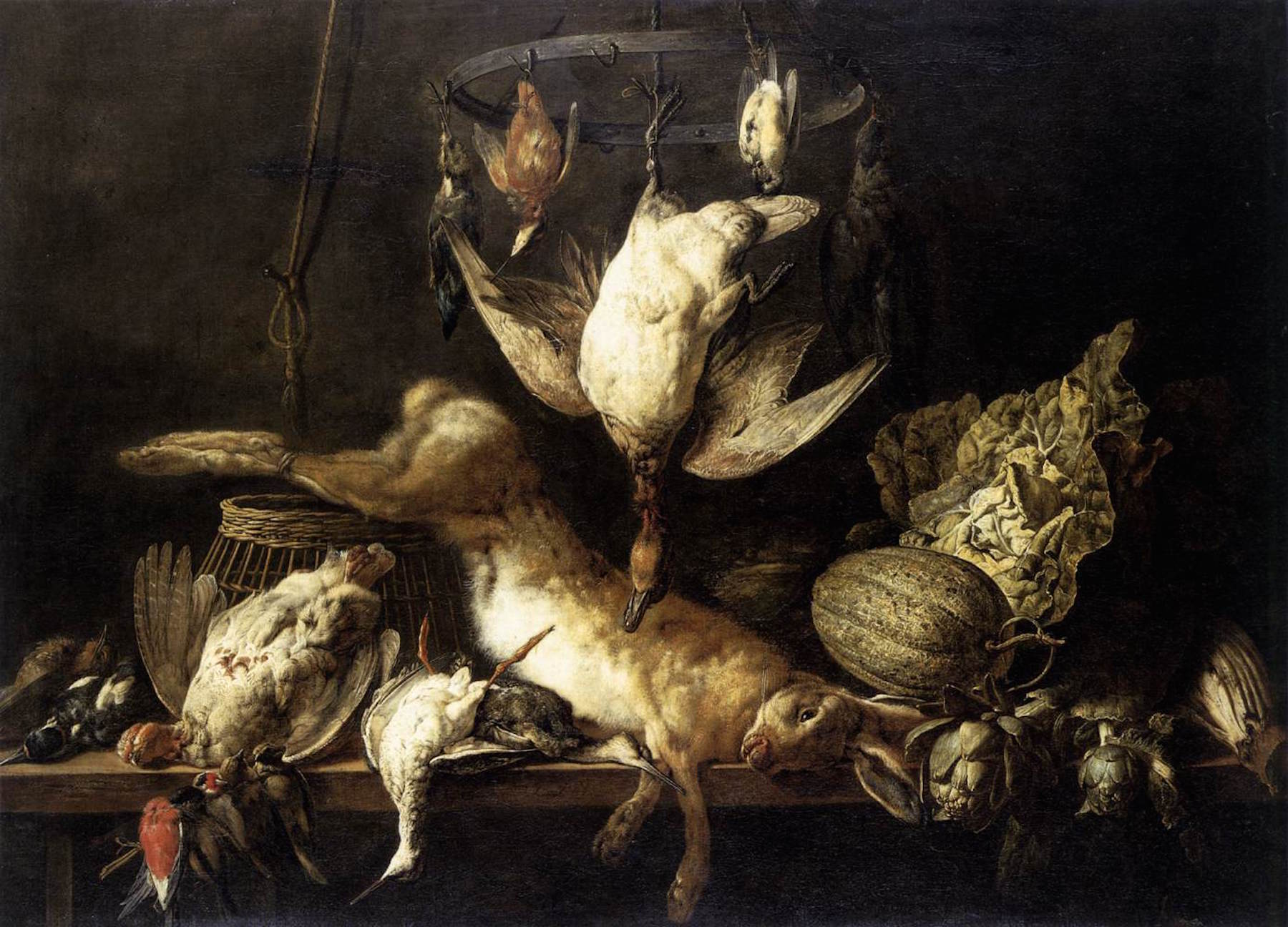 I propose that we view the horror film as the contemporary Vanitas.

I once heard a sculptor refer to the horror film as a reminder that our human body is a material. I have always had a hatred of horror films for this very reason. Our body’s temporary fleshliness illustrated so graphically, especially visually, was something I couldn’t tolerate. So I decided to look further.

Horror movies don’t usually employ guns- so it isn’t just the act of dying, itself, that gives a horror movie its power. Often the main character faces the threat of death over an extended period of time. For instance, the final girl in Texas Chainsaw Massacre faces her possible demise for half of the movie. In addition, many deaths shown in horror movies put the body’s materiality on full display. The way in which one dies, the fear, the pain, the act is significant. We are reminded of how fragile we are, of how easy and painful it could be to die. Vanitas paintings also remind us of time, our fleshly existence and our impermanence through images of clocks, skulls, dead game and fruit and flowers ready to rot.

I have chosen the 1995 film, Seven, directed by David Fincher as the perfect horror film to compare to Vanitas Paintings. I have pulled stills, parts of scenes and sound clips from Seven and compared them to Vanitas paintings pulled from the internet.

My analyses is divided into five chapters. For this proposal, I have gone ahead and made a video for Chapter 2: Temporality/Mortality and a group of stills for Chapter 3: Flesh in order to illustrate my intentions and give you an idea of the intended aesthetic. I am crafting my submission in this way specifically because I do not feel as if my past art work can compare easily to this proposal and I want you to be able to see my intentions and abilities.

CHAPTERS for HORROR as VANITAS

The horror film, Seven, focuses on the Seven Deadly Sins…that is it focuses on morality, specifically Judeo-Christian morality. Seven is not alone in tying horror to morality. Slasher flicks from the 80s are full of sexually active teenagers being killed while drinking and partying in American suburbia – all while not being watched by their divorced parents (as divorce rates sky rocket in the 70s and 80s). In comparison, Vanitas paintings were rooted in Christian morals as well – as Western societies were reminded that the hoarding of gold and material goods was a useless enterprise in the face of mortality. I will take images from Seven showing it’s focus on morality and pair them with images and writing on the Dutch and Flemish paintings of the 17th century that exhibit it’s Judeo-Christian roots.

Time and death are extrinsically linked. Both Vanitas paintings and Seven remind us of this biological and physical fact. There are pocket watches, clocks and sand timers planted throughout Vanitas paintings as well as frozen bubbles showing the painter’s ability to freeze time. In Seven there is a consistent conversation about time throughout the film. There is also a prominently seen metronome marking time and rhythm on the bedside table of Detective Somerset shown bookending the film. First it appears at the beginning of the film and then again towards the end of the film as he throws the metronome across the floor in exasperation. I have made a short video comparing time in Vanitas paintings to time in the movie Seven and it can be found here: https://vimeo.com/234939104   password: Vanitas

The Vanitas painting contains rotting fruit, dying flowers and dead animals to remind of us of our fleshly existence. The movie Seven has a little bit of bodily gore to do the same thing. I have spliced imagery together to depict this comparison. 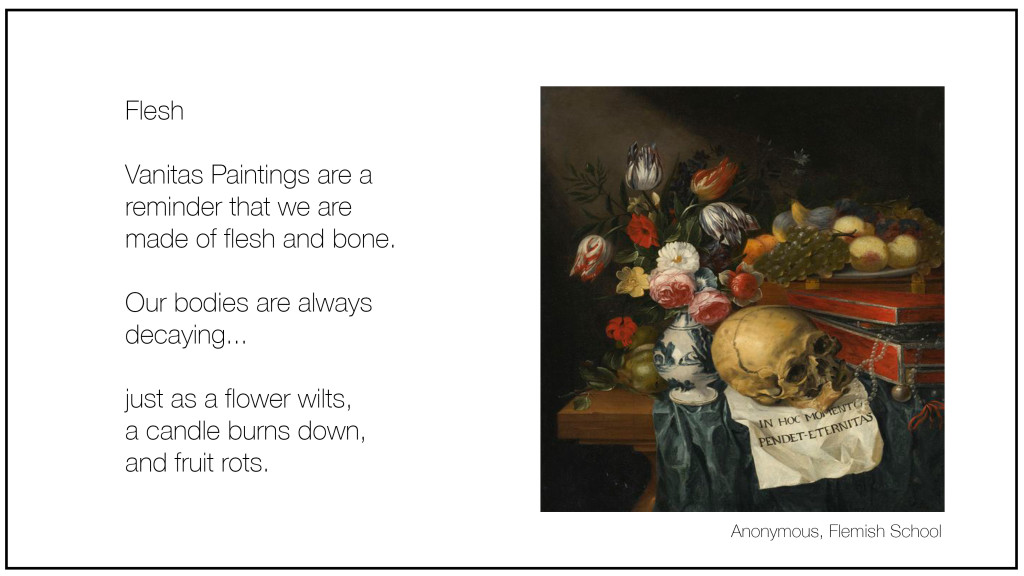 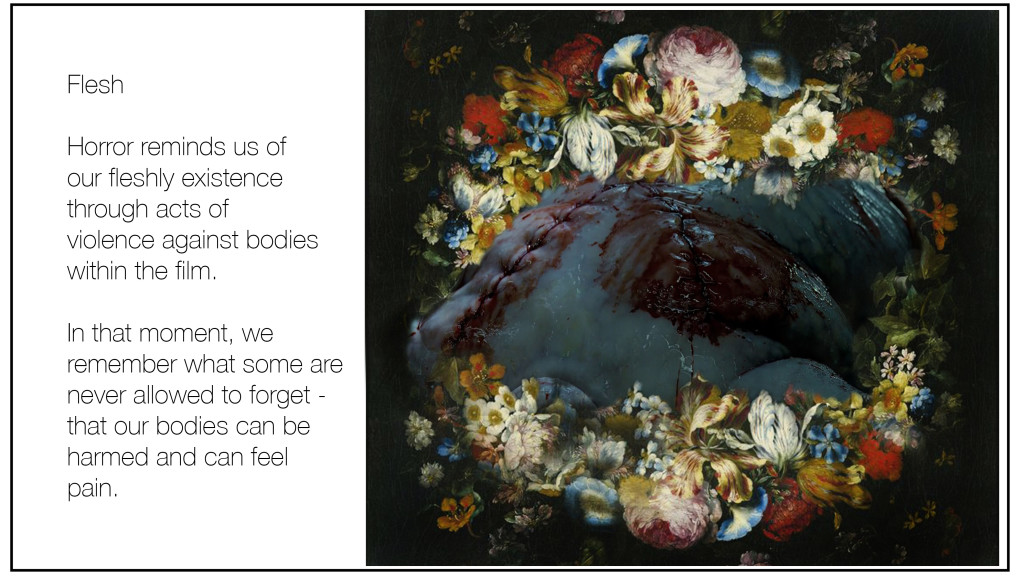 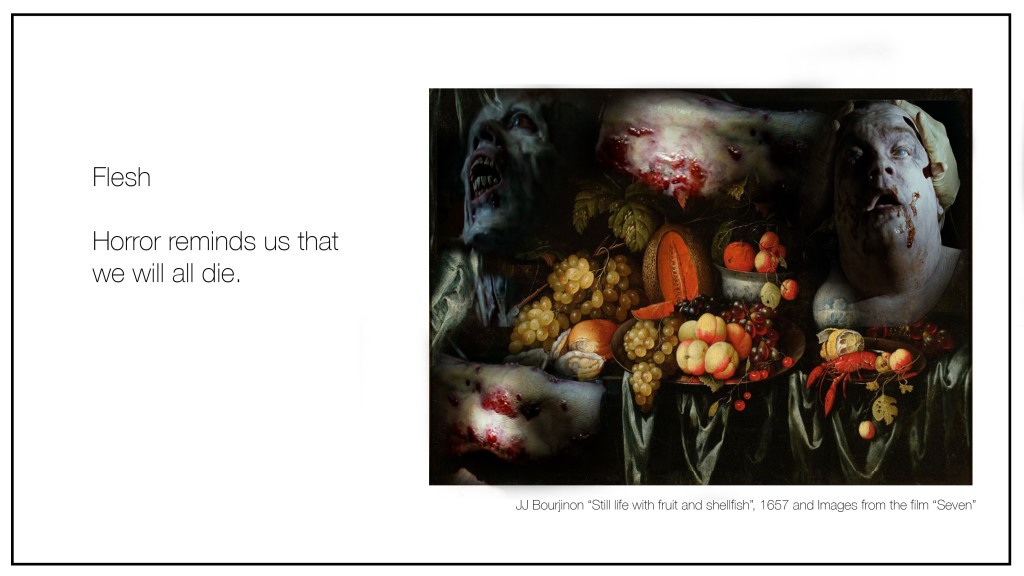 In viewing the film Seven through a Vanitas lens, I began to notice similarities in lighting and texture between the two art forms. The same lighting and texture that consciously -or unconsciously- reminds us of our flesh by skimming light over the surface of objects and people within the scene. Vanitas often used the chiaroscuro effect – dramatic lighting from one light source spilling over the scene, leaving some areas mysteriously dark and other areas sparkling with light so that we could dramatically notice the smoothness of peaches, the fur of the dead hare and the sparkle of gold jewelry. The movie Seven is lit like a film noir – moody dark corners with the leftover light spilling onto the characters making sure you are fully aware of the folds in someone’s shirt, the texture of someone’s skin. Film noir lighting in movies looks similar to the chiaroscuro effect in painting. 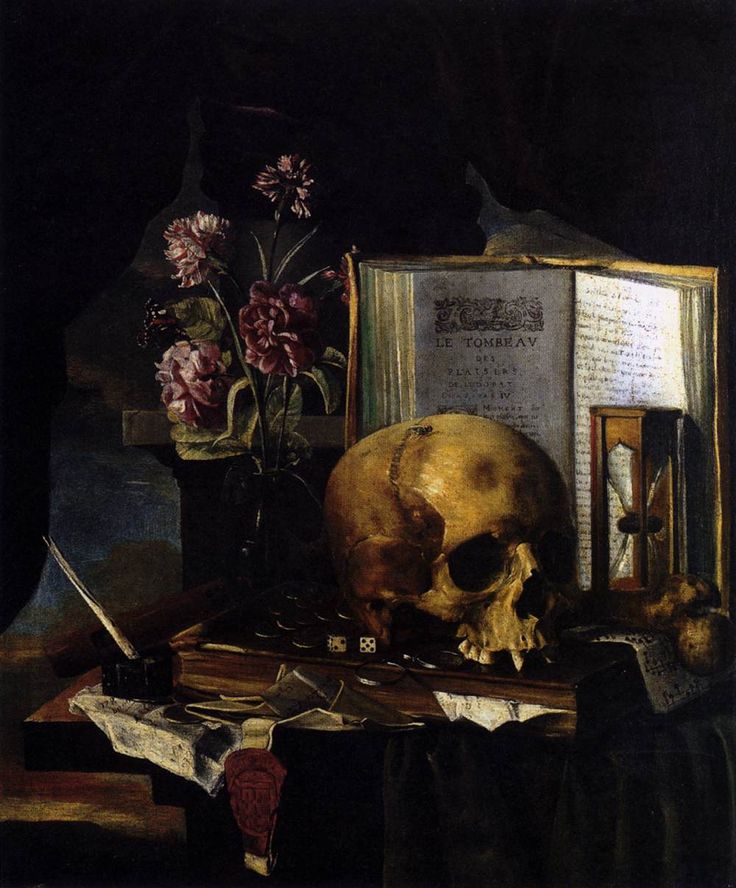 This last chapter becomes even more fine-tuned, viscerally, for those of us that are sighted individuals (and, therefore, privileging the visual). The film has a sound texture that adds to the sighted texture of Chapter 4. This sound texture is something that would have stayed on my unconscious radar and not become obvious to me if I had not dived into analyzing the visual texture of Seven. Vanitas paintings, of course, don’t have sound. This, along with the moving image and ability to narrate a story, is perhaps where we could say that the horror film surpasses the Vanitas painting with its ability to help us viscerally understand death.